When I turned up at Bangkok’s Dusit Zoo on a recent Friday, the ticket clerk let me in at the “Thai price” of 100 baht ($3), instead of the 150 baht that foreigners usually pay. Perhaps this was because I spoke to her in Thai, or maybe it was because the zoo is about to close its gates for the last time, just months after its 80th anniversary.

Located in the heart of the city, right opposite the National Assembly, Dusit is the most-visited zoo in Thailand, a beloved weekend destination for the city’s children that is famed for star attractions such as Mali, a 51-year-old hippo. Even Bangkok residents with little interest in zoos are full of pre-emptive nostalgia for what is about to be lost.

When former Bangkok governor Chamlong Srimuang staged a hunger strike outside parliament in May 1992… he complained that the eerie cries of the zoo’s many wondrous beasts kept him awake half the night.

I have rarely been inside the zoo, but as a seasoned student of Thai politics, I have often loitered in the vicinity — not least because the pavement adjacent to the parliament building was at times a venue for demonstrations and protests. When former Bangkok governor Chamlong Srimuang staged a hunger strike outside parliament in May 1992, challenging the controversial (and short-lived) appointment of coup leader General Suchinda Kraprayoon, as prime minister, he complained that the eerie cries of the zoo’s many wondrous beasts kept him awake half the night. Chamlong drew inspiration from veteran campaigner and sometime parliamentarian Chalard Vorachat, who has staged numerous hunger strikes in front of the zoo since the early 1990s — most recently after a 2014 military coup — and in apparent solidarity with the captive animals, has camped out in a giant cage.

After entering the zoo, I jumped on a shuttle that whisked me to see Mali. Near the hippo enclosure, I stumbled across one of Bangkok’s smallest museums, an air-raid shelter commemorating Thailand’s involvement in World War II — a topic that most official histories prefer to gloss over. The good news, as the state-run Zoological Park Organization has been eager to stress, is that the zoo will reopen on a larger site in Pathum Thani, a province adjoining Bangkok. But while the new zoo may offer more modern amenities and a better visitor experience – as well as neatly severing the long-standing association between overly excitable elected politicians and wild creatures – the reasons for the move from Dusit have little to do with the best interests of the animals, their predominantly diminutive visitors, or Thailand’s incompletely tamed lawmakers.

Clues may be found by reading a potted history of Dusit Zoo presented on signboards at the main entrance. The site was originally created by King Chulalongkorn (1853–1910) as Khao Din Wana, a private – and royal – botanical garden, emulating similar gardens he had seen in Europe. Sadly, Khao Din Wana became terribly neglected after the king’s death. 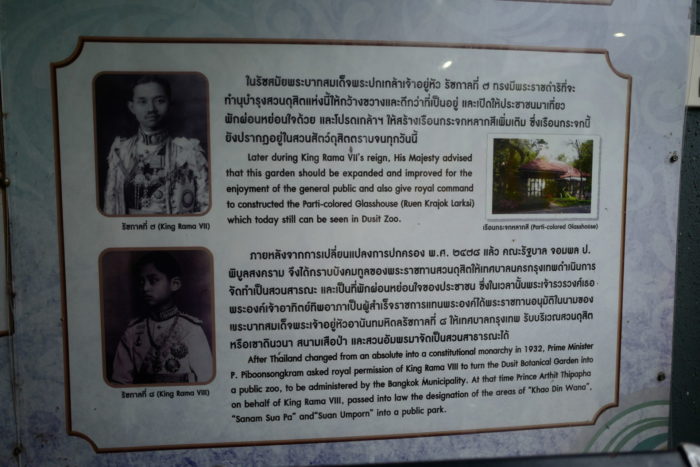 When the zoo opened in 1938, the reigning monarch was 13-year-old King Ananda, who had assumed the throne after the abdication of King Prajadhipok three years earlier. King Ananda was studying in Switzerland, and royal affairs were managed during his minority by a regency council. Power was in the hands of the People’s Party, which had brought about the end of an absolute monarchy in 1932. The palace was not well-placed to resist the government’s request to turn the royal garden into a public zoo. And while the zoo has delighted millions of visitors for decades, its presence at the core of Bangkok’s old town has also served as a reminder that the monarchy’s powers and privileges were once highly constrained. The banishment of Dusit Zoo to the provinces is a signal that times are changing under a new monarch, King Maha Vajiralongkorn, who enjoys strong support from the ruling military junta. As I circumnavigated the artificial lake that occupies much of the zoo’s ample acreage, I spotted through the fence newly-erected signs proclaiming the adjacent area around the Dusit Palace a ‘royal zone.’ An April 2018 protest at the zoo criticized the popular elephant shows as exploitative, while the sole elephant I saw on my own visit was shackled to a long chain: perhaps a suitable fate for an animal often seen as a symbol of the Thai nation. Let us hope that Siam’s most venerated creatures will be allowed to roam unleashed in a dedicated compound at the new Bangkok Zoo when it opens in about three years.

All being well, by then a new parliament complex will have opened, Thailand will have returned to an era of electoral politics, and there will be no need for Chalard, Chamlong, or anyone else to stage a hunger strike in mock captivity.